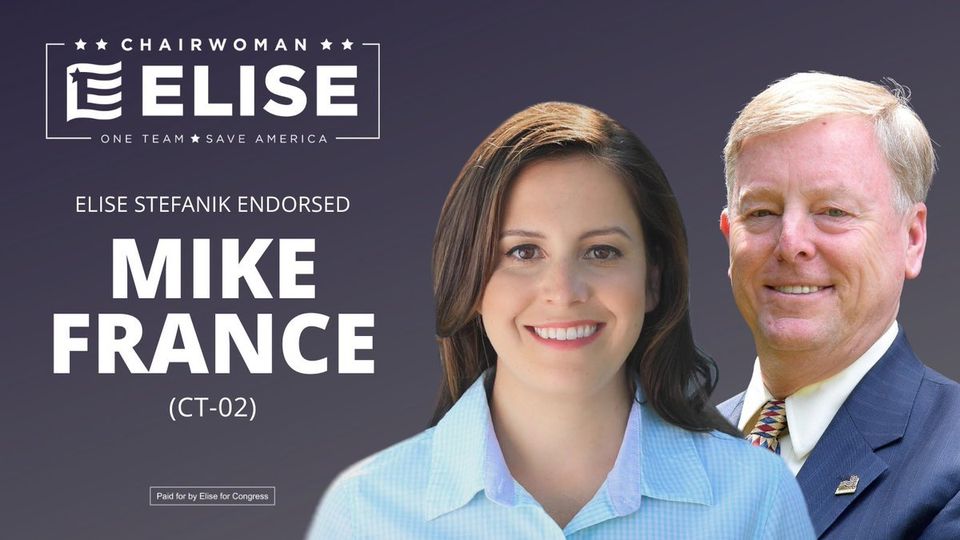 Ledyard, CONNECTICUT – Today, third ranking House Republican Conference Chair, Elise Stefanik, has announced her endorsement of Mike France (CT-2) for U.S. Congress. As the third ranking Republican in the House, Congresswoman Stefanik has been integral to GOP efforts to take back the House and giving Republican challengers like Mike France a competitive edge in flipping battleground seats.

Mike France’s campaign to unseat Pelosi’s most reliable Democrat in the House has all the makings of a Republican pick up this year: long-term entrenched Democrat faces Navy veteran with strong fiscally conservative background in a target district.

“I am proud to endorse Mike France, as his service and record embody putting politics aside and putting people first. We need more leaders like Mike who will help stop Bidenflation and get our economy and country back on track, and I look forward to working with Mike to flip this seat and deliver the 2022 Red Wave to Connecticut,” said House Republican Conference Chair Elise Stefanik.

“If gaslighting and feebly telling Americans this is all due to Putin’s thuggery were solutions, our Country would be out of this mess by now. Congresswoman Stefanik’s laser-focus on combatting this dire economic crisis is the type of leadership we so desperately need right now and I am honored to have her support,” said Mike France.  “My opponent Joe Courtney (D-CT) has a 99% voting record match with Nancy Pelosi’s failed policies, but what we really need right now is leadership that stops rubber-stamping Joe Biden and Nancy Pelosi’s failed agenda. I am a 20-year Navy vet, engineer, father, grandfather and public servant and I am anxious to see what we can accomplish for the people when we put their needs before Pelosi, pandering and petty politics.”

Mike France is the first elected official to challenge Joe Courtney in the last decade and has already built a campaign war chest five times the size of the last five Republican challengers to Joe Courtney.

Home to the nation’s largest submarine base, Mike France brings his nearly 20 years of active-duty Navy service on submarines, as well has role as head up shipbuilding in Groton to this battleground district.

“In any election the candidate that best embodies the district has a distinct advantage and Mike France is running in a district tailor made for his sterling resume,” said Campaign Strategist Alex Avetoom. “Joe Courtney has gotten by on lip service and covering up his unwavering support for the failed Biden-Pelosi agenda for far too long and the people of Eastern Connecticut finally have a champion in Mike France they can count on to put their needs before politics.”