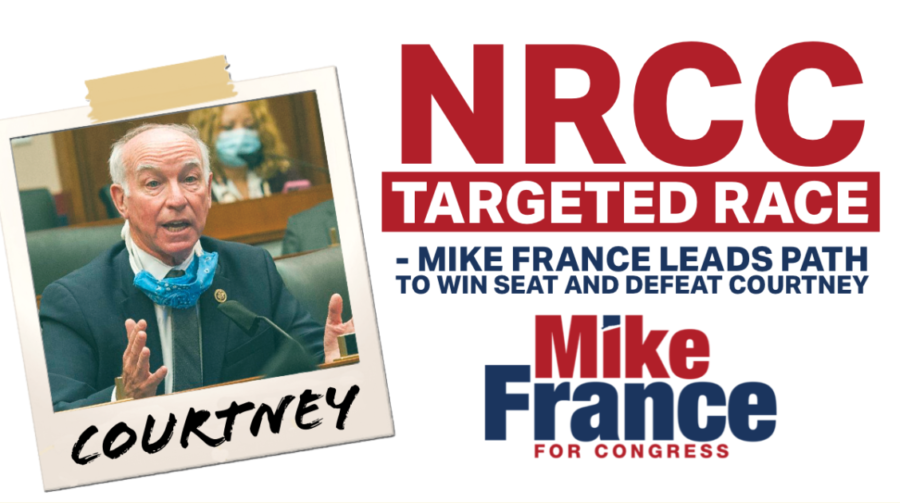 On the heels of Courtney going all in on Biden’s disastrous Afghanistan policy and after local conservatives’ impressive showing across the state of Connecticut last night, the National Republican Congressional Committee (NRCC) has added Rep. Joe Courtney (D) to it’s target list of districts to flip.

State Rep. Mike France is the first Republican in years to mount a credible challenge against Courtney, having far out-raised his Republican predecessors to date and is one of the only elected officials to mount such a challenge in the last few years. France is running in a district known the world over as the home for the Submarine Capitol of the World where, after a 20-year career in the US Navy, including multiple war time deployments, Mike France finished his career at Supervisor of Shipbuilding in Groton.

Rep. Joe Courtney has consistently tried to brand himself as a moderate Democrat, however the France campaign has been quick to bust this myth, pointing to a 100% and 94% voting record match with Nancy Pelosi and socialist squad member Rep. Alexandria Ocasio-Cortez (D-NY), respectively.

In the lead up to the tragic disaster in Afghanistan, Rep. Joe Courtney (D) had enthusiastically embraced President Joe Biden’s exit plan, even going so far as to issue public statements praising Biden for it.

State Rep. Mike France took to social media delivering a blistering critique of the Rep. Courtney putting his own party politics over people in an op-ed published in The Day titled “The Afghanistan Failure and its Enablers like Joe Courtney”.

“The truth is starting to get out about just who Rep. Joe Courtney says he is, versus how he behaves when in Washington DC and the voters are not looking. A 100% voting record match with Pelosi tells you all you need to know about this supposed moderate. Fact is, that when push comes to shove, Rep. Joe Courtney supports or turns a blind eye to the most extreme liberal policies from his part.  It’s not just Afghanistan, it is critical race theory, race riots and a long list of anti-Semitic remarks from his colleagues like Ilhan Omar whom he votes with 95% of the time!”  said Campaign spokesman Alex Avetoom. “In State Rep. Mike France, voters will finally get a principled Representative in Congress that will put their needs first.”

Thank you for reading this Mike France for Congress Campaign Update.

Mike needs your support to defeat Rep. Joe Courtney (D) once and for all, so please take a moment and click the link below to make a contribution to Mike’s campaign. Every donation counts, no matter how small…