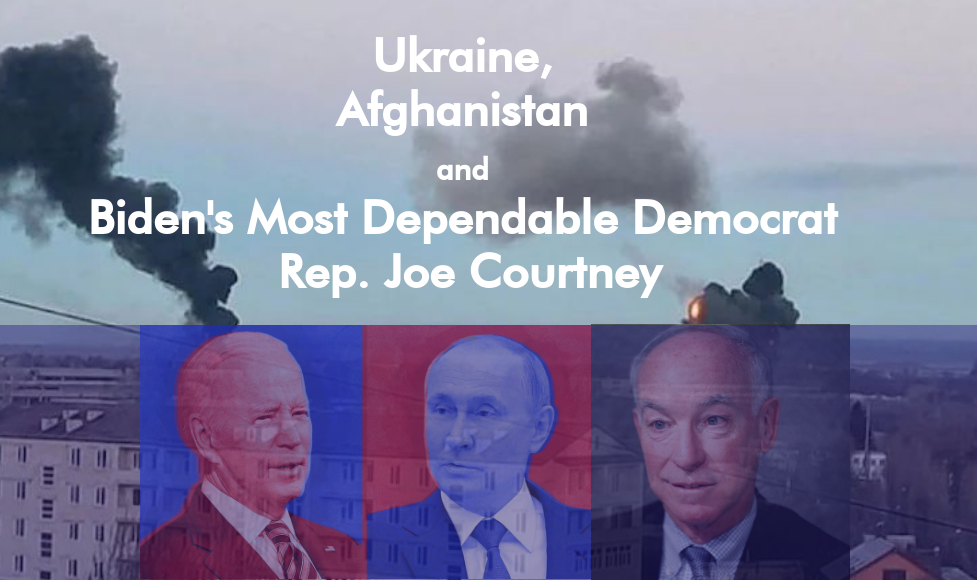 On the heels of Rep. Joe Courtney (D-CT) going all in on Biden’s disastrous Afghanistan policy, this week presented yet another disastrous foreign policy setback as Vladimir Putin has attacked Ukraine – an American ally.

The current crisis in Ukraine is the result of misguided decisions and failed policies of the Biden Administration and his enablers in Congress like Rep. Joe Courtney, Pelosi, et al.

Congressional Democrats like Nancy Pelosi and Joe Courtney will never hold the Biden Administration accountable for the retreat in Afghanistan nor the lack of resolve when it comes to standing up to tyrants like Putin.  Moreover, they are watching American intelligence given to the Chinese only to be immediately given to the Russians. When are they going to get it?

Like clockwork, Putin has invaded a sovereign nation to expand his own borders at a time when the price of oil is high and America has abandoned it’s leadership position on the world stage.

In short, he saw an opening and took it.

Democrats like Joe Courtney will crow that war is not the answer and we need to show restraint so as to not trigger WWIII. Convenient positions to take after months of silence in the face of aggression from the Taliban, the Russians, Iran, China and the list goes on.

The arc of history is clear on this point: years of liberal appeasement leads to limited options in dealing with emboldened dictators.

When you put party in front of country and stay silent in the face of threats to our country, you are no longer representing the people.  You are merely representing your party in hopes to stay in power.

BIOGRAPHY:
State Rep. Mike France is the first Republican in years to mount a credible challenge against Courtney, having far out-raised his Republican predecessors to date and is one of the only elected officials to mount such a challenge in the last few years. France is running in a district known the world over as the home for the Submarine Capitol of the World where, during a 20-year career in the US Navy, including multiple war time deployments, he finished his career at Supervisor of Shipbuilding in Groton.

IN CASE YOU MISSED IT: State Rep. Mike France wrote an op-ed published in The Day titled “The Afghanistan Failure and its Enablers like Joe Courtney”.  [Read HERE]

The National Republican Congressional Committee (NRCC) has added Rep. Joe Courtney (D) to their target list of districts to flip, but we need your support to win in November…